"Molecular dynamics simulations and experimental studies unpick the mechanism of the transport of proteins across cell membranes by the Sec translocon."

The translocation of proteins across membranes is a fundamental and essential process, achieved in every living cell by the ubiquitous Sec translocon. In bacteria, SecYEG and SecA associate to translocate proteins across the inner membrane post-translationally, powered by ATP and stimulated by the trans-membrane proton motive force (PMF). Despite structural data, the mechanism of how ATP hydrolysis is coupled to protein transport remains unclear.

The entire SecYEG-SecA complex from Thermotoga maritima was initially analysed using equilibrium atomistic MD to investigate the role of the SecA ATPase cycle in protein transport. Five independent simulations (~230,000 atoms) of the complex in an ADP or ATP state were simulated, with three (ATP) or four (ADP) of each state simulated to 400-500 ns, and two (ATP) or one (ADP) simulated to 1 μs. The data were used to determine the conformations of the complex in the different nucleotide states, thus probing the conformational changes associated with the SecA hydrolysis cycle.

The data suggest a coupling of SecA nucleotide occupancy to the opening of the SecY protein-channel, with perturbations within SecY feeding back to SecA to regulate nucleotide exchange. The observations are supported using a FRET pair across the SecY lateral gate, and stopped-flow analyses of the rate of nucleotide exchange with different SecYEG variants. Steered-MD simulations of different sized peptides crossing the SecY channel propose a functional difference between these SecY states, namely that the open state is required to translocate bulky regions of pre-protein. Stopped-flow analyses of SecYEG-SecA crosslinked to peptides demonstrate that nucleotide exchange is promoted by bulky regions of peptide.

These data are consistent with a Brownian motor mechanism; whereby the opening and closing of the channel are synchronised to the hydrolytic cycle of ATP, co-ordinated also with the translocating pre-protein, to set up a ratchet allowing diffusion across the membrane while preventing backsliding. 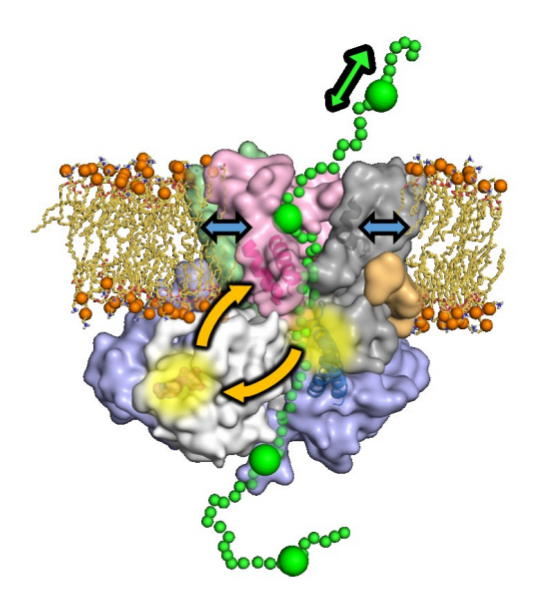 A simplified form of the translocating pre-protein is shown as small green spheres, with difficult-to-translocate regions (i.e. “blocks”) shown as larger spheres. In the closed state of the complex (with ADP bound), the pre-protein can diffuse freely back and forth unless a block is present. When this occurs, the two-helix finger of SecA ‘senses’ the block and triggers the release of ADP (yellow arrow).

The subsequent binding of ATP results in an opening of the SecY channel (yellow arrow; blue arrows), resolving the blocked pre-protein and once again permitting free diffusion (green arrow). After a set time, ATP is hydrolysed and the complex reverts to the closed state. If the blockage is still on the inside of the channel, the cycle is repeated. If the blockage is on the outside of the channel, then no mechanism exists to open the channel on the outside so the block has been ‘ratcheted’ through SecY.

The outcomes from this study hold a threefold importance:

A novel mechanism for the process of protein secretion through the bacteria Sec translocon.

Training of a PhD student in use of molecular dynamics/analysis of large simulation data.

Feeding in to an ongoing antibiotic development collaboration with Karen Dowers in Dundee.

For more information about this study, please contact Ian Collinson - This email address is being protected from spambots. You need JavaScript enabled to view it.

This study made use of a HECBioSim ARCHER project allocation EP/L000253/1 and was also supported by the following grants: